Whether your need is an emergency in the middle of the night or a routine inspection, our qualified technicians have what it takes to make your fire protection responsibilities easier to manage. Call (623) 582-3369 to schedule an appointment today. 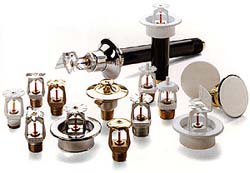 An automatic fire sprinkler system is one of the most effective methods of controlling or suppressing a fire.

A fire sprinkler system is an integrated system of underground and overhead piping designed in accordance with fire protection engineering standards.

The installation includes one or more automatic water supplies. The portion of the sprinkler system aboveground is a network of specially sized or hydraulically designed piping installed in a building, structure, or area, generally overhead, and to which sprinklers are attached in a systematic pattern. The valve controlling each system riser is located in the system riser or its supply piping. Each sprinkler system riser includes a device for actuating an alarm when the system is in operation. The system is usually activated by heat from a fire and discharges water over the fire area.

Wet Pipe Sprinkler System
A sprinkler system employing automatic sprinklers attached to a piping system containing water and connected to a water supply so that water discharges immediately from sprinklers opened by heat from a fire.

Deluge Sprinkler System
A sprinkler system employing open sprinklers that are attached to a piping system that is connected to a water supply through a valve that is opened by the operation of a detection system installed in the same areas as the sprinklers. When this valve opens, water flows into the piping system and discharges from all sprinklers attached to the system.

Dry Pipe Sprinkler System
A sprinkler system employing automatic sprinklers that are attached to a piping system containing air under pressure, the release of which permits the water pressure to open a valve known as a dry pipe valve, and the water then flows into the piping system and out any opened sprinklers.

Pre-action Sprinkler System
A sprinkler system employing automatic sprinklers that are attached to a piping system that contains air, with a supplemental detection system installed in the same areas as the sprinklers. There are three distinct types of Pre-action Systems.

Foam Sprinkler System
Any of the previously described systems connected to a special foam concentrate reservoir at the system riser that automatically delivers a combination of foam and water when the system is activated.

We offer a variety of residential and commercial fire protection services to assist with your requests.

Set up an appointment for our technicians to take care of your fire protection equipment and needs.